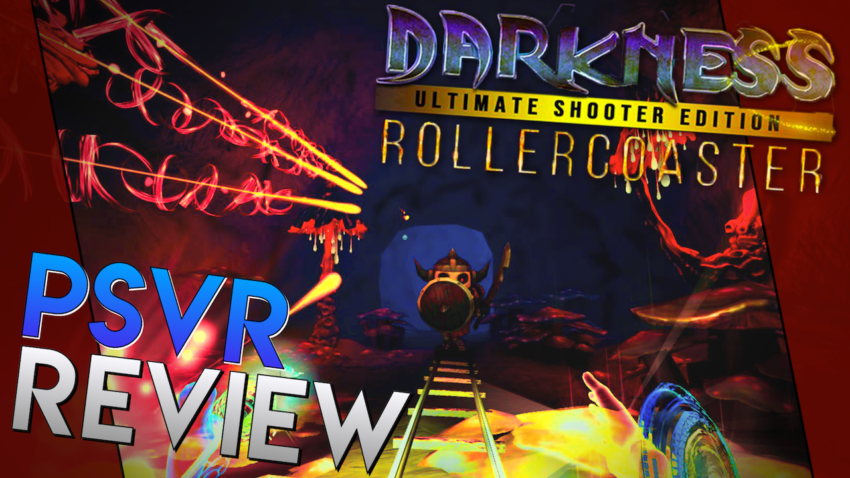 One of the most popular types of VR experiences are rollercoasters, recreating the exciting and fast experience in VR without having to wait in lines or pay for tickets is awesome. We’ve had a couple of these experiences on PSVR, but never before have we had a full game centered around riding them. All we’ve had are theme parks that include a coaster, or coaster experiences that last no longer than 3-10 minutes. So when Darkness Rollercoaster – Ultimate Shooter Edition was announced for PSVR, I was interested to try it myself. So now that it’s out, is Darkness Rollercoaster any good?

Darkness Rollercoaster is a PSVR game that has you going on crazy rides while trying to survive hordes of monsters. There is a little story involving a wizard, but it’s nothing special and doesn’t really add anything to the game.

The rides themselves are good. There are turns, jumps, different paths, and even parts where there isn’t a track at all. This game is at it’s best when it’s fast with a lot of obstacles and enemies. But one problem I have with the rides are that sometimes it’s way too slow, typically when there are obstacles on screen, which can kill the fun for a while.

When it comes to graphics, they’re pretty good for this game. Some of the environments are very cool to look at, especially in the final level of the game. Just don’t go in expecting extremely detailed or realistic environments and textures.

There are a few different types of rides in this game too, including a randomly generated coaster. Which basically takes pre-built areas and randomly puts them together. This was cool for the first few times, but after a while it started to get boring because I was visiting the same areas over and over again. There is also a bonus mini-game which is basically a Beat Saber clone, where you move left and right while slicing and shooting enemies to the beat of a song. It’s fun for a few minutes, but after playing the first song I didn’t really desire to go back and play the rest of them.

I would like to address a few issues I had with the game though. First of all, it feels kind of janky and unpolished at times because of several smaller issues. Which includes text issues, grammatical errors, and a few graphical oddities. None of these made it unplayable or annoying, but it just could be a little more polished.

Another issue is something that doesn’t affect me, but could for several other players. And that’s the possibility of motion sickness, since there are jumps, twists, fast motions, leaning, moving backwards, and a bunch of other movements, I could definitely see some players getting motion sickness. And the reason I bring this up is because there aren’t any settings to help with this. There aren’t any options for blinders or movement related stuff. So if you get motion sickness from VR, please wait for a patch before considering this game.

The final issue I would like to discuss is that I found myself occasionally getting hit by unavoidable obstacles, or things I couldn’t see. I thought it was me just being stupid at first, but this happened throughout my entire play through. I would be avoiding everything perfectly, blocking attacks, killing enemies, and would still get hit for seemingly no reason at all. And because of these issues it made dying a lot more annoying, because it felt like the games fault instead of my own. It could just be that I didn’t notice, but it happened enough for me to mention it.

So overall, Darkness Rollercoaster – Ultimate Shooter Edition is a decent game. It has several impressive and fun moments, but the issues I ran into did bring down my enjoyment. I just hope the developers can polish it up to make it a more enjoyable experience. If you really like rollercoasters in VR, this is one of the better options. It’s priced fairly and lasts a lot longer than the other rollercoaster games and experiences on the market right now. It’s just not as polished or detailed as the other ones.

UPDATE (2/15/20): The developers have let me know that they are working on fixes for some of these issues, and plan on adding free content up until Christmas 2020.