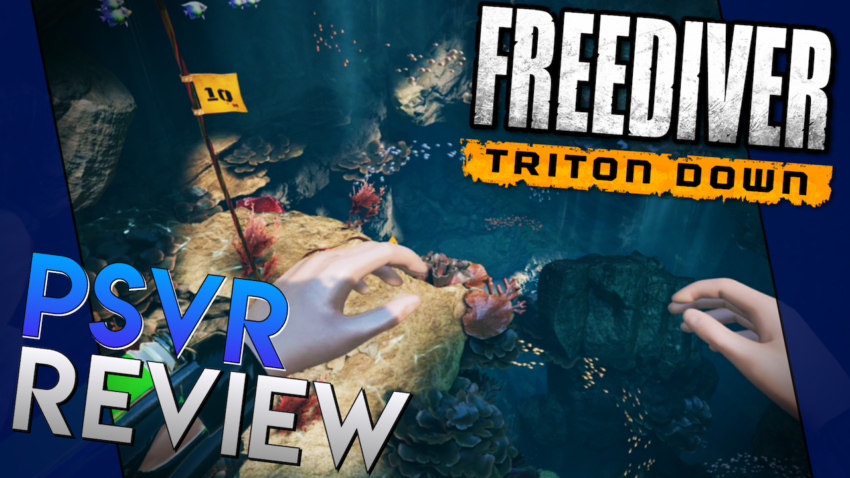 Archiact games has been developing and publishing PSVR games since the launch of the headset, including games like Waddle Home, Pierhead Arcade, Evasion, Blasters Of The Universe, and Darknet. Each time I see a game with their name attached to it, it interests me. So when Freediver: Triton Down was announced for the PSVR, I was excited to play it. Especially with all of the positive reviews it got on the PCVR version of the game. So, is Freediver: Triton Down any good?

Freediver: Triton Down is a PSVR adventure game that takes place entirely underwater. We haven’t really had a game like this on PSVR, so that also added to my excitement. The story of Freediver has you playing as a world-class diver known as Ren Tanaka. To keep it simple and spoiler free, things go wrong, the ship you’re on is sinking, and you have to escape. It goes more in-depth with that, involving mysterious structures, interviews from the future, and more. The story isn’t going to blow you away, but I enjoyed what was here, and the voice acting is also pretty good.

The gameplay of Freediver consists of swimming around, solving puzzles, and keeping your oxygen levels high. As a player you can swim in any direction, grab onto any surface or object, use items like axes or a flashlight, and use oxygen masks to regain oxygen. The puzzles in this game aren’t anything too crazy, but can be made more exciting because of rush you feel to replenish your oxygen. It did a good job at keeping me engaged throughout the entire experience.

The graphics look pretty good in this game. They don’t look as good as the PCVR versions of the game, but it gets the job done and is still an impressive experience.

Freediver is a very polished experience as well, I only ran into one issue while playing the game, and that was when I recentered inside of a vent I ended up outside of the vent, and had to let myself die to get back in the playable area.

So overall, Freediver: Triton Down is an awesome experience. I enjoyed it from start to finish and had a great, and sometimes intense, time trying to escape the sinking ship. Though my biggest issue with Freediver is that I wish it was longer, which in some ways is also a positive. The game can be finished in just under an hour, and left me wanting a full length adventure game featuring this gameplay. I definitely recommend checking this out, but I do think it’s just a little too high on the price.