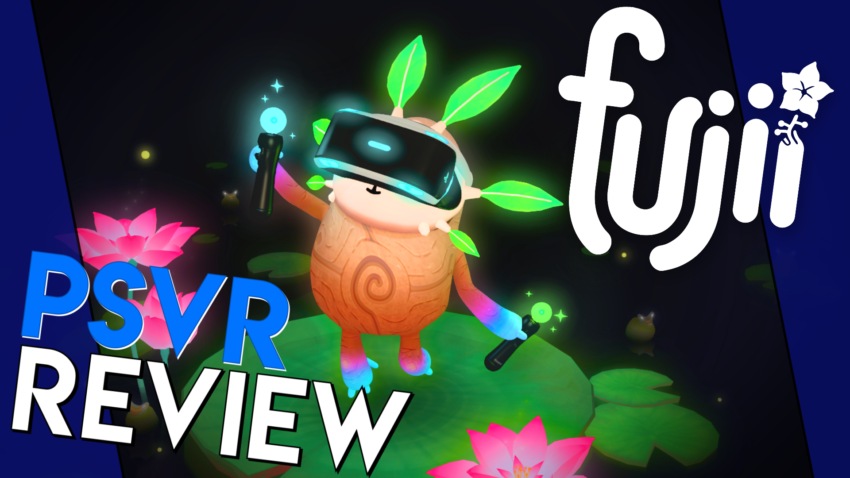 Funktronic Labs is a developer that released their first PSVR game, Starbear Taxi, over a year ago. It was a fun little title, but didn’t really blow anyone away. And now Funktronic Labs has released their latest title, Fujii, for the PSVR. The game intrigued me with it’s art style and gameplay as soon as I saw the trailer, and I was excited to get my hands on it. So now that Fujii is out, is it any good?

Fujii is a PSVR game that has you exploring three different biomes trying to find seeds to progress. The game doesn’t really have a story, at the beginning of the game you find a cute little creature that acts as your companion and follows you while you go around collecting seeds.

The gameplay consists of solving puzzles and exploring biomes to collect special orbs and seeds. The special orbs are what you use to unlock new areas, purchase more seeds, and pots to plant them in. The seeds can be planted in pots in a hub area, where you can grow your own garden with unique plants. Some of these plants will also reward you with the special orbs. The gardening aspect of this game is fun, and makes this a more peaceful and relaxing experience.

The puzzles in this game are very simple, and rarely did I have trouble on them. Some puzzles involve grabbing specific items, and others involve memorizing notes to then repeat them. The puzzles aren’t anything innovative or challenging, but I never really minded that. What Fujii does best is creating a calm and enjoyable game, that never causes you to stress, get frustrated, or confused.

Another aspect of this game that adds to the calm feel is the art style and visuals presented. The effects and objects look great. It might appear simplistic at first, but they do a lot of cool things with the visuals. The world feels alive, and all three biomes in the game are beautiful.

One thing I must bring up is that this game uses teleportation only. This turned me off at first, but after playing for a few minutes I started to like it. The game is built around the teleportation, and I never felt like I needed free locomotion after those first few minutes. And if they were to add free locomotion they would have to make a lot of changes for it to work well. I thought I would mention it for players who strongly dislike teleportation, but for me it worked great in this game.

So overall, Fujii is awesome! While the game is very simple, there’s something satisfying about collecting items and growing your garden. Every aspect of this game further adds to a calm and relaxing feeling felt all throughout your journey. You’re not going to see any action, intense moments, or complex puzzles. But I’m fine with that, every once in a while it’s nice to sit down and just play a calm game like this. And once I started playing it, I couldn’t put it down until I finished it. If you like games where you can explore and find collectibles, or just want a relaxing experience in VR, Fujii is a great choice!