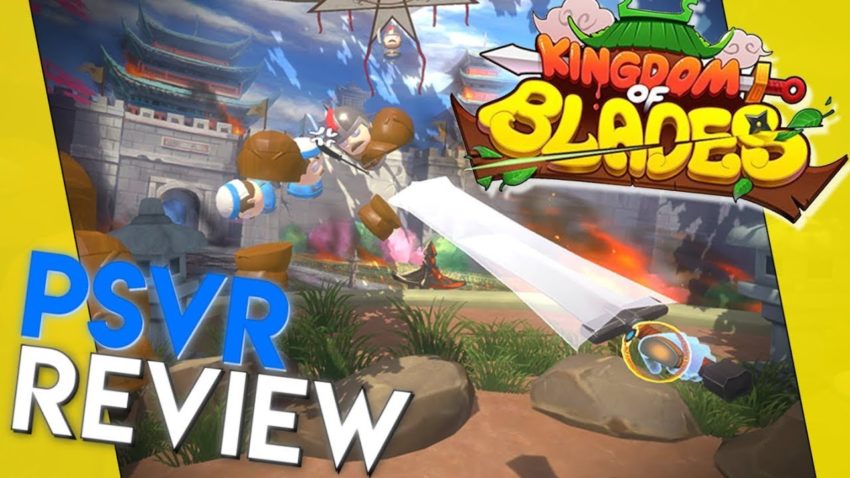 One of the older PSVR titles, Fruit Ninja VR, was a really fun version of the popular app. And I personally really liked the game. Which is why I got excited for Kingdom Of Blades, which looked like a fruit ninja type game but with a few different mechanics. And it was also published by DeerVR, which are the people who put out Code51 mech arena. So, is Kingdom Of Blades any good?

Kingdom Of Blades is a Fruit Ninja like VR game that has you wielding weapons and slicing enemies. You play as a warrior in the Three Kingdoms Period of China and face off against several different generals. There are even little cutscenes in the game that explain the story. The story is ok, and clearly wasn’t the focus of the game.

At the beginning of the game you are given a sword and shield, but you can later change your weapons to whatever you want. You could dual wield swords, have a boomerang and a sword, a shield and a spear, and a lot of other combinations. You also have armor, that can be upgraded with temporary abilities. And finally you have a special ability, the more enemies you take out, the more your ability charges up. Once it’s fully charged you can activate it and it will help you during the level. You start out with an ability that slows down time, but you later unlock other abilities. Like a thunder ability, or one that brings in soldiers to help you fight.

The game has two different game modes. Chapter and Challenge, chapter is basically the story mode. It has 5 chapters that contain a few levels and a boss battle. Then there is challenge, which has an endless mode or a mode that has you fighting bosses. Then there is also a showroom, where you are given achievements. If you complete a achievement you obtain coins, but i’ll talk more about that later.

As for the gameplay itself, soldiers are flung at you and they try to attack. So you have to slice them before they can hit you, like I said it’s very similar to Fruit Ninja, but what’s different is that if you miss a solider you’ll take damage. You have three hearts in each level, and after a few hits you’ll have to restart the level. This can make for some really challenging parts, because at many times in the game they go crazy with enemies. And there are also enemies in the background that try to throw shurikens at you. And you’ll have to either dodge out of the way or hit them back. There are also power ups that drop occasionally, which can help you a lot. Some power ups make your sword longer, and others take out enemies.

And the boss battles are interesting. Most of them just have you slashing your swords extremely fast until they die. But later in the game you’ll have to be more careful with the bosses.

By completing levels you unlock coins, which can be used to buy new weapons. Which is how you unlock more swords or buy new weapons, like a boomerang or spear. I was surprised with how much depth this game had, as I wasn’t expecting too much from a game like this. It has a lot of unlockables and gameplay features, and it can get pretty tough at times.

But I did run into a few issues with the game. At one point I couldn’t slice anything in the menu, so I had to restart the game. And another time I was in the middle of a boss fight and the game crashed. These issues weren’t that annoying, but hopefully the developers can fix them.

So overall Kingdom Of Blades is decent. It’s very similar to Fruit Ninja, but I think the developers did a good job with trying to make it feel different. It’s got a lot of things to do and the gameplay is decent, but it’s not anything amazing. If you liked fruit ninja, you’ll probably enjoy this too. But it’s nothing you should feel like you need to play, it’s just a simple and fun game with a fair price.