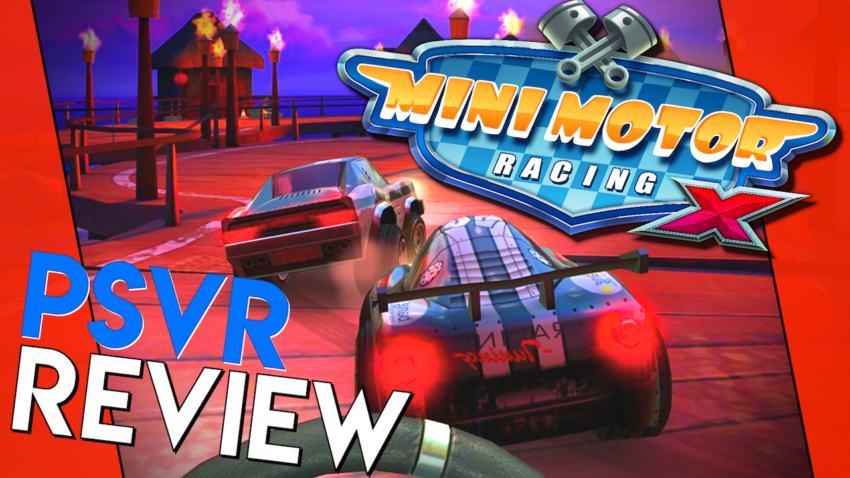 10 days ago I reviewed a VR karting game known as Touring Karts, and I enjoyed it. It filled the void of VR kart racers on the PSVR, and gave me what I wanted from a kart racer. But I didn’t expect another kart racer to come out so shortly after Touring Karts. Today I’m taking a look at Mini Motor Racing X, by developers Binary Mill, who previously released Rush VR and Gun Club VR. So, is Mini Motor Racing X any good?

Mini Motor Racing X is a PSVR racing game that has you controlling a small car across several different tracks and game modes. The game has a career mode, free play mode, time trials, and bumper ball mode. We’ll talk about Bumper Ball later though.

The racing consists of moving across small tracks trying to complete all laps faster than your opponents. There are several different cars in the game, and each of them have their own stats. Your car can move in any direction, use items, and has a built in boost feature. The only big feature absent from this game is drifting, but because of the way the movement works with the car, I never really felt like I needed drifting to do better in the game.

The career mode has you progressing level by level racing against AI. It’s a standard career mode, and doesn’t do anything amazing. The free play mode lets you play any track you want without having to unlock anything. And the time trials are just the races without other cars, and a timer. I was hoping the time trials would show a ghost of your best timed run, but it seems like they did the bare minimum for this mode.

In the standard races you can switch between a normal mode and Type X mode. The normal mode is just races with boost items only, but Type X adds several different items to use in the map. I preferred Type X mode over the normal mode, it was just a more exciting experience, and with normal mode I found it much harder to catch back up if you get behind in the race.

One cool thing about Mini Motor Racing X is that there are different perspectives in the game. You can play it up close to your car, or far away like if you were playing with a mini RC car. Both perspectives have their perks and disadvantages, but what’s great is that you can switch between these perspectives at any point in the game.

Another great feature is that each game mode can be played with up to 4 friends online. Which really enhances the game, and just makes everything more exciting and fun to play. There’s built in voice chat, a party system, and voting system. The multiplayer was done perfectly in this game.

So now let’s talk about Bumper Ball. Bumper Ball is basically a Rocket League clone in VR, which sounds amazing at first, but a few issues hold it back. My first issue is the AI, which works well in the races, but was way too aggressive in Bumper Ball, and made it more annoying than fun. My second issue is the ball physics, which were too light. The ball was often bouncing too high or going in the wrong direction. These issues kept the single player side of bumper ball from being fun, and for the multiplayer almost every round ended with neither side getting a single point. Despite these issues I actually had a lot of fun in the multiplayer, because of how chaotic and competitive the game was. It just needs a few fixes and changes to make this part of the game amazing.

So overall, Mini Motor Racing X is a decent game. The best way to play this game is with friends. It’s still fun in single player, but some of it’s issues really show when you’re by yourself. The bumper ball mode brought some of the craziest and funnest moments I’ve had in VR, but really needs to be patched to make me want to return to it. I enjoy this game, but it’s not as enjoyable as it could be because of the issues I mentioned. If you have friends to play this with, this is a great game despite it’s issues. Otherwise, I would wait for a few patches to check it out.