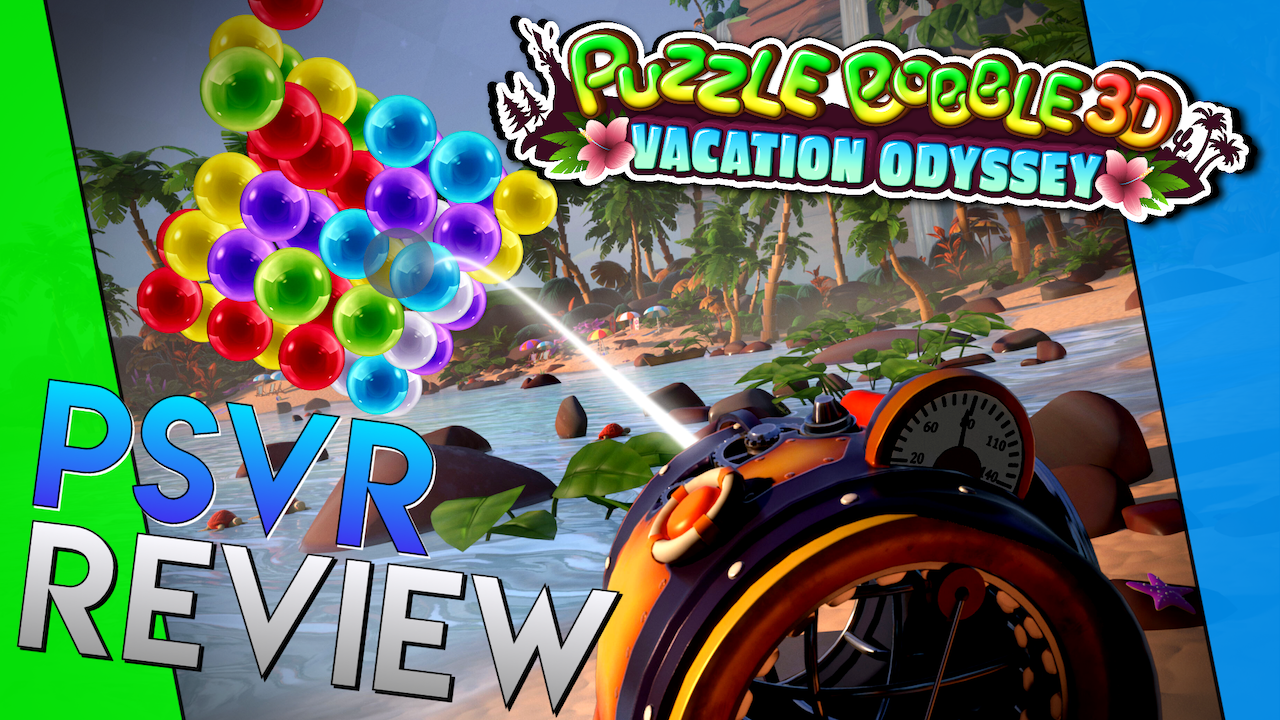 Earlier this year my interest was sparked when I saw the announcement for Puzzle Bobble 3D Vacation Odyssey. I instantly recognized the two main characters, which I now know are named Bub and Bob, because of the original Bubble Bobble and Bust-A-Move games. And when it was announced to be arriving on PSVR, I was excited to check it out and see how well the series translates to VR, especially when seeing that Survios was developing the game. So now that Puzzle Bobble 3D Vacation Odyssey is out, is it any good?

If you’re unfamiliar with how the Bubble Bobble series plays, at its core, consists of connecting and popping colored bubbles. And while Survios made the leap to VR with this game, it very much contains that same concept. In Puzzle Bobble 3D Vacation Odyssey, you’ll be matching and popping bubbles by matching 3 of the same color until you reach the bubble core. Each puzzle in this game stems from a puzzle core, where you’ll have to pop the bubbles from the outside to find the core and finish that puzzle by destroying it. As a player, you can load randomly colored bubbles into your cannon, and pull back a string to fire! This cannon acts similarly to a slingshot. One notable feature is that you can also switch bubbles with your friend Bob if you need a different color.

The game has 3 modes: Story, Infinite, and Duel. Story mode lets you play across 100 different puzzles where you’re limited in the number of bubbles (or sometimes time) you have. You can also use coins unlocked by playing the game to purchase abilities to assist you in the story mode. Each level has 3 obtainable stars, adding some nice replayability for those who enjoy completing games.

As for the infinite mode, you’ll have to solve an infinite amount of puzzles in an intense and fast-paced mode! As more puzzles appear, they slowly get sucked into the storm above, and if anything goes inside the storm it will end your run. This was my personal favorite mode of the three as it creates an intense puzzle-solving rush!

And finally, there is a duel mode that allows you to join players online, whether that’s friends or strangers, in a 1 versus 1 battle. Unfortunately while making the review I couldn’t find anyone online to try out the mode with, but upon looking into it, it’s basically the infinite mode but with another player by your side as you both try to outlast each other.

The main issue I had with Puzzle Bobble was with how the bubbles line up. When aiming a bubble, it shows you a preview of the bubble snapping into place. It feels like the bubbles are on a grid while aiming, and that can make shooting them a little awkward. Going back to a game like Angry Birds, the slingshot mechanic showed a dotted line of where the bird would go, while with Puzzle Bobble it feels more restricted and harder to aim, especially with puzzles that are farther away.

I find it somewhat difficult to give a verdict on simpler games such as Puzzle Bobble. It does exactly what it sets out to do, and I don’t have any issues with it beyond sometimes annoying aiming, but it isn’t exactly something I would hook up my headset just to play. This could just come down to personal preference, but in the case of games like Puzzle Bobble, I find it more appealing to play the non-VR version as it’s very simple to pick up and play for a few minutes. The game is completely playable without VR, but it seems like the main focus was VR, as the gameplay doesn’t work well outside of it.

Overall Puzzle Bobble 3D Vacation Odyssey is a decent game, with some well-designed puzzles, nice environments, music, as well as some fun modes, but the gameplay doesn’t really compel me enough to come back to it after the first few times playing. I could only really recommend this to those who are wanting a more simplistic VR puzzle game where you can just sit back and relax. But for me personally, I’m just starting to lose interest in simpler PSVR titles like this after a few years of playing them.