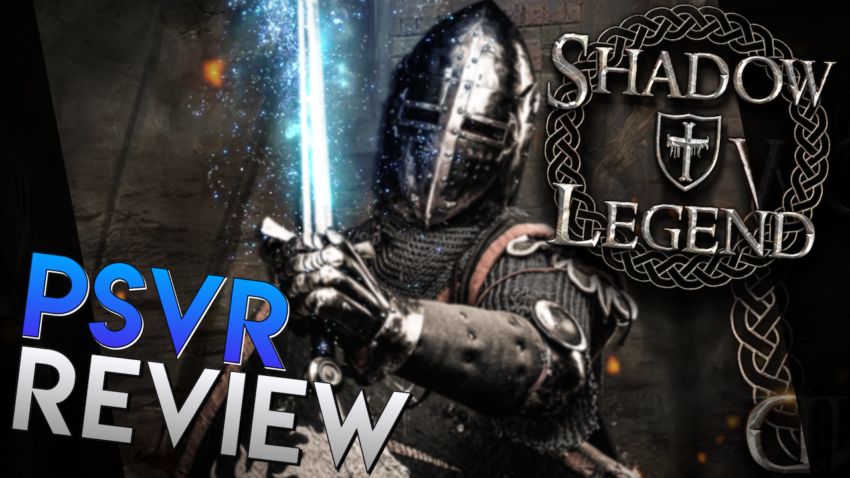 A game that has been anticipated by PSVR fans for several months now is Shadow Legend. A game developed by VirtruviusVR, who were the developers of Mervils, a PSVR game that released early in the headsets life. But Shadow Legend is a big jump from Mervils, Mervils was a 3rd person platforming adventure game, while Shadow Legend is a first person adventure. Videos and screenshots looked really good, but many were worried that the hype was bigger than it should be. I’ve tried to stay optimistic, but now that the game is out I can officially say whether or not this game is worth purchasing. So, is Shadow Legend VR any good?

Shadow Legend VR is a first person adventure game that has you playing as a chosen knight called the Grand Master. Your goal is to traverse deadly lands to stop an evil god and save your people. It’s a story we’ve all heard several times before, but it was still enough to get me excited.

The gameplay consists of exploration, puzzle solving, and sword combat. When you start the game it heavily leans on exploration and interacting with your environment. They drop you into a big first area with several side quests, items to collect, and things to mess around with. You can pet and feed a horse or dog, practice archery, climb buildings, forge weapons, talk to people, buy and sell items, and much more. The beginning of the game gave me a big sense of wonder that I hadn’t felt in a VR game in a while. You could spend the first hour or two of your playtime in this area alone, and it was amazing. Though the first area really is the biggest section in the game, the rest of the sections are more linear and are faster to complete. But they also get more into the puzzle solving and combat aspects of the game. The puzzles were fun to solve and I found to be perfect in difficulty, it was never too hard, and never too easy. The combat in Shadow Legend is pretty good. You’re able to wield a close combat weapon, and a ranged weapon. You start off with just a basic sword and bow, but later in the game you can find or purchase new weapons. The close combat consists of blocking attacks with your weapon and hitting your enemies at the right time. One fun thing about the combat is that you can actually slice off limbs, which makes me sound a bit crazy, but it’s fun to do in VR! The combat works pretty well, and was fun to mess around with. And your skills are put to the test later in the game with the two bosses that appear. I won’t spoil what the bosses are, but they were some of the best I’ve seen in VR.

Another good thing about Shadow Legend is just how much you can collect. The game has an inventory system that lets you collect dozens of items, and it works really well. Collecting also helps you gather valuable items that you can sell to people to earn money. There is a trading system where you can make offers to the NPC, which also works well. Using the money you collected you can purchase new items from people, mostly including new weapons. But for these weapons you’ll also need runes to purchase them. Runes are hidden throughout the game, and act as the main collectable. If you’re a completionist you’ll be spending a lot more time in this game than most players.

What I love about Shadow Legend is that it’s constantly introducing new mechanics to the player. Even though I’ve already mentioned a lot of mechanics, there are still a lot more I haven’t mentioned. But I’d like to keep most of the game a surprise, because playing through this game for the first time is an experience I won’t forget. Shadow Legend never got stale for me while playing, and I got so into the game that I ended up finishing it in one sitting.

Graphically this game is beautiful, there were several moments in the game where I was just standing still looking at the environment around me in awe. The textures are high in quality, there was little to no blur, the lighting effects are beautiful, animations flow well, and it just looks so good. The game also has a Pro patch, so it’ll look even better for PS4 Pro players.

I might be hyping up this game to be amazing, but don’t set your expectations too high. This game is amazing, but don’t go in expecting something like Skyrim. This game took me around 4 and a half hours to beat, and if you’re going for all collectibles it’ll take you somewhere around 6 hours. It’s a fantastic game throughout, but just don’t expect a big 10 to 20 hour experience.

So overall, Shadow Legend is a fantastic game. It’s a great adventure game from start to finish, and I never found myself getting bored. The gameplay is great and varied, the graphics are beautiful, it’s polished, there are so many mechanics to mess around with, and more. If I had to say one complaint, it would be that some of the sound effects are cheap and overused. Shadow Legend VR, is definitely worth a buy.