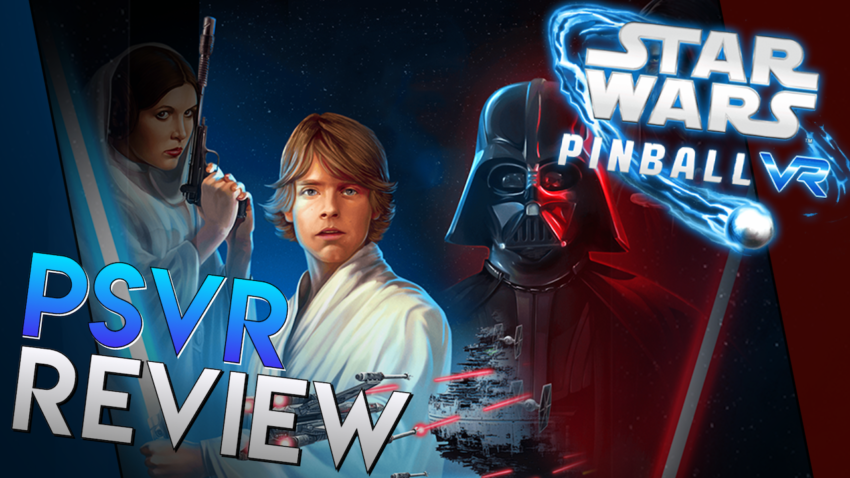 A game that released a few years ago for PSVR was Pinball FX2 VR. This was a game released by Zen Studios, who are known for their wide variety in pinball games featuring tables of either original or licensed properties like Marvel, The Walking Dead, and more. Despite hearing good things about the game, I was hesitant. When looking at the game I never really thought I needed to play pinball in VR, as I’m sure a few of you might be thinking now. But a while later I picked up the game on sale and was shocked with how well they transferred the experience of playing a pinball machine into VR. There was something both immersive and magical about it. So naturally, when Zen Studios announced Star Wars: Pinball VR, I was already on board! Since pinball is defined by its table, playing a set of new tables is like playing a brand-new game. So after months of waiting, is Star Wars: Pinball VR any good?

Star Wars Pinball VR is a game that gives you 8 different Star Wars tables to play from and adds a whole bunch of content on top of them. If you were expecting a simple port where the tables are all there is to the game, you might be surprised to see Zen Studios packed a ton of content into the game.

As you start the game you’re put into a hub area filled to the brim with Star Wars decor. In this hub, you’ll be able to play the 8 pinball tables, view achievements, choose music through a jukebox, change the decor, and view the online leaderboards. Though while speaking of the leaderboards, on the PSVR version it crashes every time you try to view them. So hopefully that’s something Zen Studios can patch out. And as for the decorations, you’re able to customize almost everything in the hub, adding a more personal touch to that area. As you complete goals and play the game, you’ll unlock more and more things to put in the hub.

Before moving onto the gameplay, there are two major aspects to discuss. With these being the light and dark sides, as well as the campaign. At the start of the game, you’re able to choose between the light or dark side, which you can contribute to through playing the pinball tables. As for the campaign, there are tons of levels you can go through with their own objectives in each level. The objectives include getting a certain amount of points within 5 minutes, or getting points with limited balls, to name a few examples. Each level has three tiers to achieve, so there’s some replayability to each of the levels if you don’t get the highest tier on your first attempt.

As for the tables themselves, they’re fantastic! Like I mentioned earlier, there are 8 tables included. These tables include Star Wars Rebels, Rogue One, A New Hope, The Empire Strikes Back, Return of the Jedi, The Mandalorian, Masters of the Force, and Classic Collectibles. So whether you’re a fan of the original movies, the more recent films and shows, or the animated side of Star Wars, there’s something for every Star Wars fan. Each of the tables are well designed and fun to play with. The tables are packed with tons of animations, lights, effects, audio clips, and more. And another neat thing is that the area around you starts to change with several moving characters and vehicles. For example, in the Mandalorian stage, you’ll find the Mandalorian himself standing by you and talking while you play.

Whenever you select a pinball table to play, you can either select classic mode or arcade mode. The classic mode is just default pinball, as you would play in real life. While the arcade mode allows you to use some of the new mechanics the game has to offer. The main new features are the force powers and talents. These are abilities that you can unlock and upgrade as you play the game. You can select up to two force talents and one force power at a time. Force talents are like your attributes, or things that occur when a certain event happens. While force powers can be manually activated to change the game, for example slowing down time. These abilities are interesting, but I personally didn’t find myself using or purchasing them.

So overall Star Wars Pinball VR is a great game! I had a great time playing the tables and found it hard to stop myself from moving on from one. The main and only drawback about the game is its current state with the glitches it has. While I only experienced issues with accessing the leaderboards, I’ve heard from others who have put more extensive time into the game, that they’ve crashed while playing the tables. There are also a few minor glitches here and there, but the main issue really comes with the game crashing. So while I would absolutely recommend this game for fans of Star Wars and pinball, you might want to wait for a patch or two if you want a more stable experience.