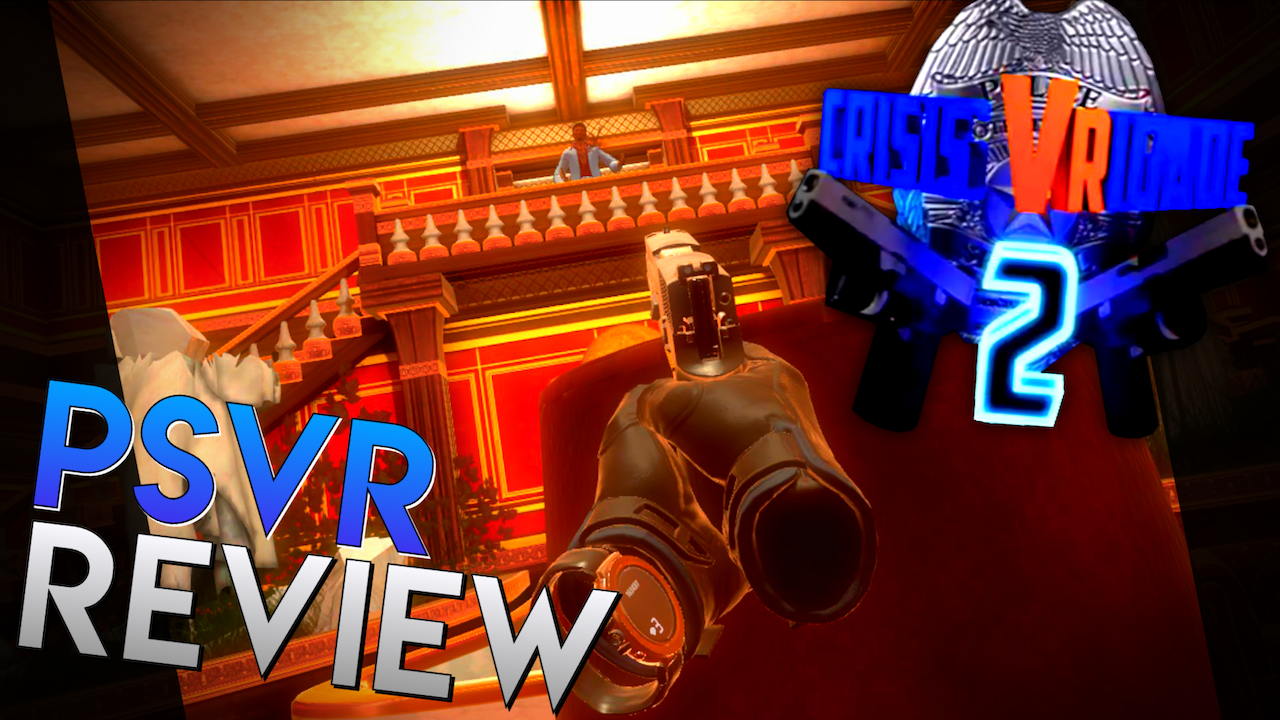 On February 5th, 2019, Crisis VRigade released on the PSVR, receiving great reviews for being an exciting and cheap PSVR game, and people only grew to love it as the developers over at Sumalab added more updates like new missions and online multiplayer! And now in the middle of 2020, we’ve received Crisis VRigade 2 for the PSVR! So, is Crisis VRigade 2 any good? And does it exceed its predecessor?

Crisis VRigade 2 is an arcade-like game that has you moving from point to point fighting waves of enemies and avoiding endless amounts of bullets. This game is in the same vein as classic games like Time Crisis or The House Of The Dead. If you’re unfamiliar with those games, it’s basically a first person shooter that has you moving from point to point, taking cover and taking out all enemies in that area. So if you’re expecting something like Call Of Duty, you won’t find it here.

The game has three different missions in total, each consisting of a bunch of rooms, a variety of alternate paths, boss battles, enemies to take down, and power-ups to collect. Each of these missions are fairly difficult, just like the first game, but one great addition to this sequel is coins. You gain coins by taking down enemies, and these coins can be used to purchase both temporary and permanent powers and items. You can purchase health, guns, cosmetics, and a hard mode. You can also use your coins after dying in a level to continue, but it’s a high price and can only be redeemed twice per attempt. I loved this new addition, as I thought it added a new sense of progression past completing the three missions. Because in the original game it was easy to lose hope after getting stuck on the same level for long amounts of time, with no other way of progressing other than trying over and over again.

One thing I love about the Crisis VRigade games is that you’re forced to use the environment around you to the fullest. If you plan on succeeding you’ll have to be strategic and take cover to avoid the overwhelming amounts of bullets. The game constantly has you hiding against walls, ducking down behind objects, and peeking around corners to get a sneaky shot on the enemy. The firefights are some of the most immersive I’ve experienced in VR. You just have to make sure that you have a good camera angle, so that you can capture your movements while you’re standing or ducking.

Probably the most impressive upgrade of Crisis VRigade 2 is the graphics. The first game had a blocky, Minecraft-like style for all the environments and models, which was fine but wasn’t anything impressive. But this game takes it to an entirely new level by having a realistic style with some impressive environments, and the models are cel shaded making them stand out more from everything else in the game. The visual upgrades are very impressive in Crisis VRigade 2, and they definitely help to further the immersion of the game.

I did run into a few issues with Crisis VRigade 2, the first being that I would lose track of where I was both in my room and in the game world, and I found myself confused on where the center of the game world was. I think it would be useful if the developers could put a little marker on the ground, or some sort of setting that could display where the center is if you stray too far away. My other issues are more minor, with one being an issue where I both won and lost a mission at the same time. It still unlocked the next mission for me, but I had to restart the game because I couldn’t interact with anything. My other nitpick is that I noticed a few small graphical issues, like a wall that was invisible. But there wasn’t anything that ruined my experience or harmed the gameplay.

So overall, Crisis VRigade 2 is a fantastic game! I was expecting to have a lot of fun with this game, but I honestly didn’t expect to love it this much. This game has some of the most exciting and intense firefights you can get in VR, with the perfect amount of difficulty. The game supports both the move and aim controllers, which work really well. And the game is only going to get better, as it’s getting online multiplayer in a few months, and a few other updates. Crisis VRigade 2 is now one of my favorite VR games, and I highly recommend you pick it up!