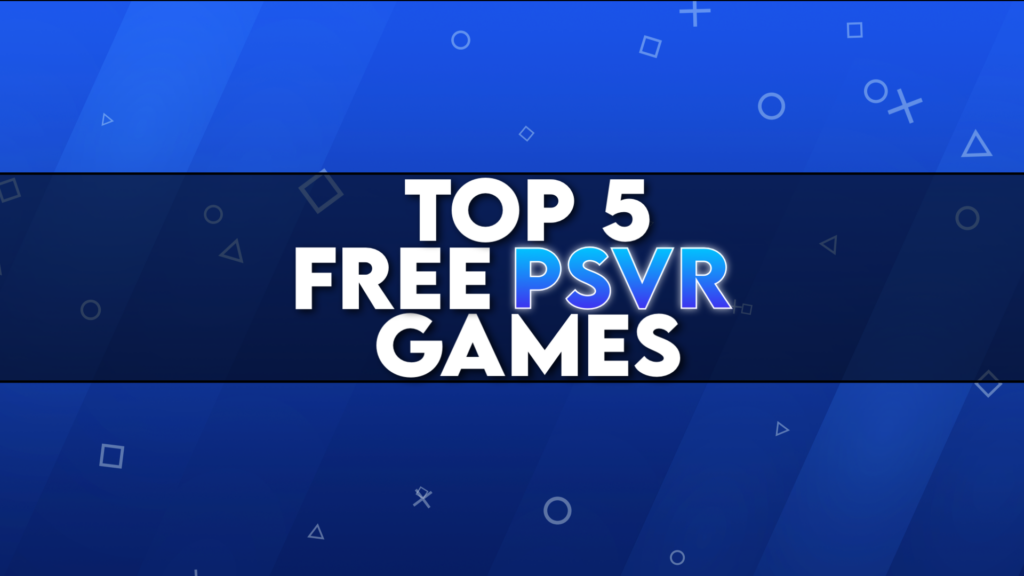 After years of PSVR, one of the most common questions many users have is: what are the best free PlayStation VR games? Over on my YouTube channel, I’ve made it a yearly tradition to put out what I believe to be the best free PSVR games so far, which doesn’t include demos or 360-degree videos. Lately, we haven’t been receiving many free PSVR games, in fact, some of the games on my previous lists have disappeared entirely; but there are still plenty of great free titles to check out! So without further ado, here are my top 5 free PSVR games as of 2021!

Playroom VR is one of the most unique PSVR games, as it provides several single-player and local multiplayer mini-games. When a local multiplayer game is announced for PSVR I’m always excited, mainly because games like Playroom VR really set the bar so high for what you can do with the hardware in a party or group setting. There are both cooperative and competitive mini-games that range from capturing ghosts, to having the non-VR players fight against the VR player as a sea monster. This is also where the concept for Astro Bot: Rescue Mission originated, as a platforming mini-game where you jump around while saving robots and fighting monsters. Playroom VR is definitely one of the most creative PSVR games, and it’s something I would recommend to anyone looking for some fun mini-games.

Maybe it’s just the child in me, but Spider-Man: Far From Home VR is a blast every time I launch it. Initially, I didn’t have high hopes for this experience as it was made solely to promote the movie, but I was shocked with how far they went with this experience. There’s a quick story mode where you swing around and fight a giant robot, but where the game really shines is with its free-roaming mode. Far From Home lets you swing freely around a large chunk of New York City that’s filled with time trials, combat trials, collectibles, and areas to explore. There are also a few unlockable suits to collect for motivating you to find the collectibles in the city. And on top of that, the web-swinging mechanics are really well done, and give you a great sense of motion and rhythm to how you swing. This game really brought me back to some of the older Spider-Man games, and it’s great if you have any interest in being like Spider-Man in VR!

Yes, I know I previously said that no demos would be on this list, but I have to make an exception for this one. Because Resident Evil 7: Beginning Hour is a completely separate experience from the full game, filled with multiple endings, hints to the plot of the main game, and several areas to explore. Instead of following the usual logic of taking a segment of the full game and turning it into a demo, Capcom went out of their way to make an epic teaser for the full game. Resident Evil 7 is my VR game, so this demo was amazing as I got to experience something different from everything in the main game. If you don’t mind some VR horror, this is some of the best you can experience in VR! The only downside to this demo is that it’s currently unplayable on the PS5, and it seems pretty unlikely they’ll fix that.

If you’ve played Rec Room or have seen my videos before, it’s probably not a surprise that Rec Room made the number 1 spot. Rec Room is a game that never seems to get old, as there’s always both new official and user-created content to go and enjoy! And after a year filled with isolation, it has only further proved that it’s a perfect platform for bringing people together. Rec Room is essentially a social platform where you can browse a variety of hubs, games, and rooms while also interacting with strangers or friends. The developers have been updating this game for years, adding new content like the ability to create levels. Rec Room is definitely the best social PSVR game we have so far, as well as the best free game so far! The only possible competitor I could see for Rec Room is if VR Chat gets on PSVR, but I’m not very confident in that appearing anytime soon.

So those were my Top 5 Free PSVR games of 2021! I’m always keeping an eye out on new releases, so if we continue to get better free games I’ll make sure to continue updating this list as time goes on. PSVR 2 is nearing release, so I have no doubt there will be an influx of new free games and experiences to check out!