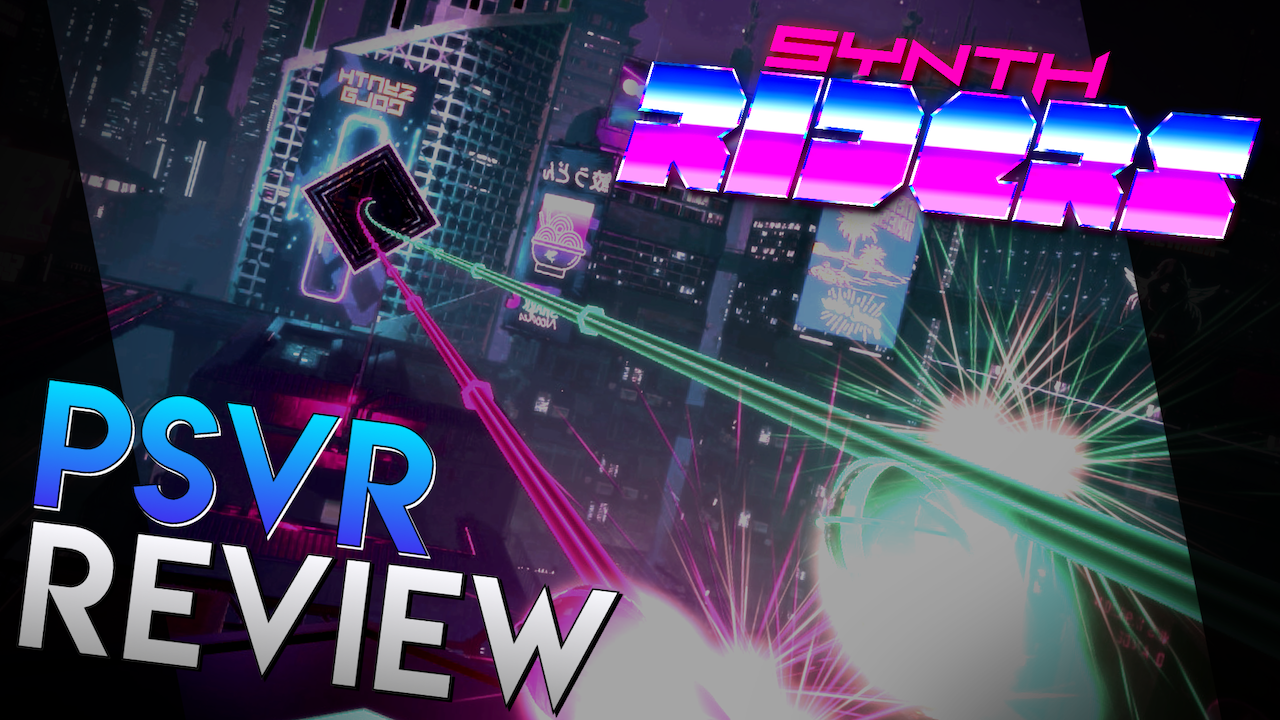 After receiving several rhythm games on PSVR, I’ve learned that they can be some of the most enjoyable and addicting titles on the headset. Whether that’s the extremely successful Beat Saber, or something different like Thumper or OhShape, I’ve spent dozens of hours playing VR rhythm games. So naturally, I had an interest in checking out KlugeInteractive’s game Synth Riders. I’ve heard some good remarks about the previous versions of Synth Riders, but now that it’s over on PSVR, is it any good?

Synth Riders is a rhythm game that’s all about hitting colored beats with your fists. One hand can destroy pink beats, and the other can destroy blue beats. It’s a simple concept that you’ve no doubt seen many times before, but what makes Synth Riders interesting is the various mechanics, songs, and features accessible to each player.

The main gameplay loop consists of hitting beats, moving your hands across rails, and dodging obstacles. On top of the normal pink and blue beats you hit, there are also yellow and green beats. The yellow beats can only be destroyed when combining both hands, and the green beats are a string of beats that you can only hit with one hand, and the fun part is that you get to choose which hand you’ll use. As for the rails, these are lines you’ll have to follow along with your hand as they spin around, go up and down, or wherever else, until the end of the line. While concentrating on these beats and rails, you also have to avoid hitting any obstacles in your path. All of these mechanics combine to make a really fast, fluid, and exciting gameplay loop that gives the feeling of dancing.

And of course with a rhythm game like this, there’s a point system as well as global and local leaderboards to keep you coming back. The points mainly rely on the strength of each hit, and how close you were to the center of the beat you hit. But one unique feature is that there are events constantly occurring, where for a limited time you can compete with others to reach the highest score on a song.

Synth Riders has a total of 54 free songs, and over 30 additional songs in the form of DLC. The DLC allows you the option to purchase a single song, or to get a bundle of songs for a cheaper price than buying them individually. I think they did a great job at giving you enough base-game content to keep you playing for hours, while also keeping the option open with DLC to those who want more songs to enjoy. As for the songs themselves, I think there’s a good variety in genres and artists so you should be able to find at least a few songs you’ll enjoy.

Each song has a total of 5 difficulties: easy, normal, hard, expert, and master. The majority of the songs have all difficulties, but I did find a couple of exceptions. On top of the various difficulties each song has, there’s a very select few songs that have an experience label on them. If a song has an experience label, that means it has a dynamic background that’s constantly changing and moving while the song plays, essentially putting you into a crazy music video. This isn’t a background that can be generally used across all songs, it’s specifically made for the song with various scenes and visual queues, all while being in sync with the music. I thought these experiences were very impressive, and I’d love to see more of them in the future as only a couple are currently out.

As for the general backgrounds that can be used in any song, there’s a great variety and I feel that they went above and beyond with each of them. The average VR rhythm game background is a standard arena with maybe some moving objects or flashy lights, while you sit still waiting for beats to move towards you. With Synth Riders, the arena is constantly moving and changing. For example, there’s an arena where instead of standing still you’re moving forward in an endless world, with various structures and effects. Or in another arena you’re in the middle of a futuristic city with tons of ships and robots moving around you. It’s arenas like these that breathe extra life into the gameplay and make for a more exciting visual experience.

Synth Riders also has all the modifiers, settings, and features you could ever want. First of all there are various profiles you can select or create to change up the gameplay, such as an easier, more-relaxing profile, or a hardcore profile with disappearing and faster beats. There are also smaller features such as choosing a random song, making a favorites list, changing the colors of beats, filtering songs, and a long list of other doodads.

So overall I think Synth Riders is a fantastic game and ranks high among the VR rhythm games I’ve played so far. There’s a fantastic variety and amount of songs, an engaging and intense gameplay loop, backgrounds that enhance the overall experience, and enough difficulties, features, modifiers, and settings to keep things interesting. I’d also like to mention that Synth Riders has some great tracking, graphics, as well as enough diverse movements to give you an intense workout. If you’re looking for a VR rhythm game, Synth Riders would be one of my first recommendations.