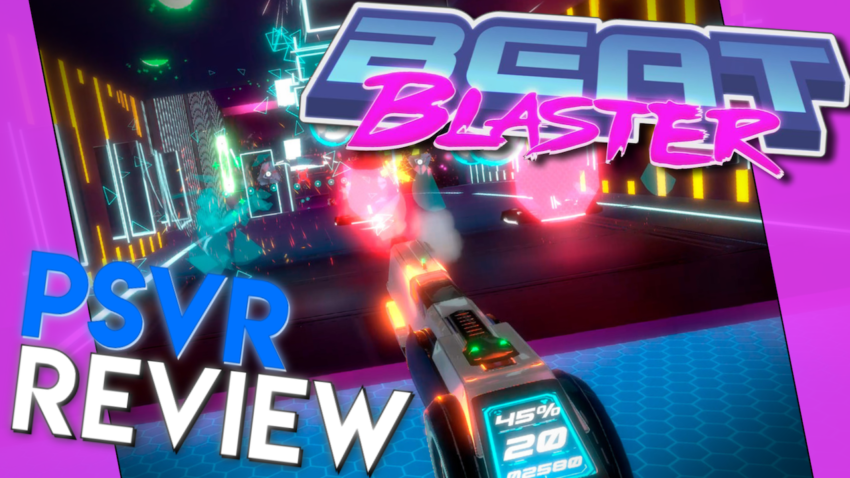 A game that released about a year ago was a game called Operation Warcade, it’s an arcade shooter that was released by Ivanovich games. I really enjoyed the game and now they’ve put out a new game called Beat Blaster. So, is Beat Blaster any good?

Beat Blaster is a game that has you playing through different levels. Each level has a unique song and layout, they also introduce new mechanics every few levels.

The game is all about moving fast and taking out enemies. Each level is somewhere around 2 to 3 minutes long, but you’ll be spending a lot more time on each level due to difficulty. As when you die you have to restart the entire level. You are given a gun, or two guns if you play with the move controllers, which are used to shoot robots. There are drones, turrets, and more. Then there are things you can’t destroy, like lasers, blocks, and doors.

The movement is really interesting in this game. You can choose between “move” or “tilt”. Move has you physically moving to move in the game, if you lean forward in real life you’ll move forward in the game. And tilt just has you tilting your head. My favorite was “move”, but it does take a while to get used to. You can move forwards, and left and right. You cannot move backwards, you can slow down and stop though. And when you slow down time slows down.

After playing for a while you start to get into the rhythm of it and it becomes very fun.

This game is extremely addicting, I found myself trying over and over on each level without stopping. You can instantly restart the level without any loading screens, so it’s really easy to play for long amounts of time.

There is also a scoring system and leaderboard. There are tons of things to shoot in the level to gain points.

So overall Beat Blaster is fun. It feels kind of like an arcade game, similar to their previous game Operation Warcade. The game is extremely addicting and fun, the music is great, it’s challenging, and just a good time. I did run into an issue where I could go through some walls, but that’s about it when it comes to glitches. The game also supports the Dualshock, Aim Controller, Move Controllers, and even the 3D rudder. If you’re looking for a fun arcade-like game to play for a few hours, this a great choice!