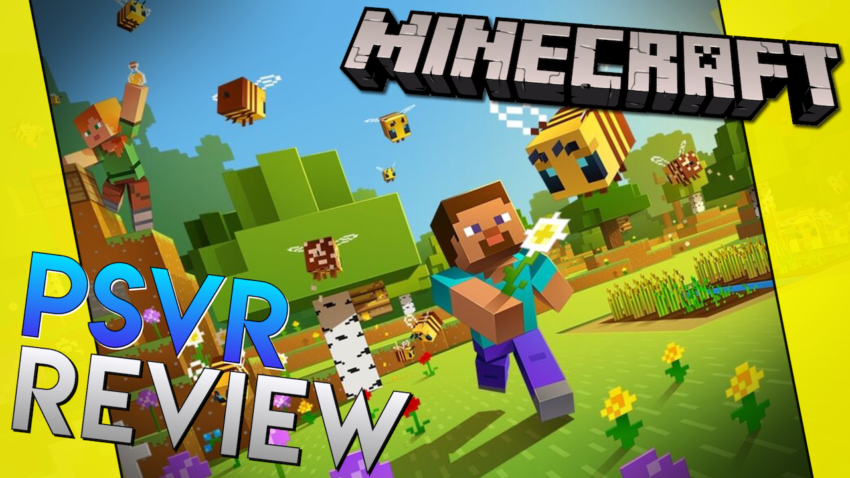 One of the biggest games of all time has just arrived on PSVR. Minecraft is a game that I’ve spent countless hours on, so to see this game finally come to PSVR is special for me. At first glance Minecraft might appear like a simple block game, or that one kids game that blew up on YouTube, but once you dive into the game you can discover there’s so much more. Here is my review for the Minecraft VR update on PSVR!

The first side of Minecraft is the survival mode. You can create a world, change some world settings, name it, then press create to randomly generate a new world. From here on out you’ll start with nothing and collect blocks, create tools and armor, build shelter, and really do whatever you feel like. You’ll also have to worry about health and hunger bars. There isn’t a story to Minecraft, but there are different biomes, special structures, and different dimensions to enter. And there is technically an end to Minecraft with credits, but it just dumps you back into the world when you’re done. Now I will say there is a really big learning curve to Minecraft, and if you hop into the game for the first time you will struggle to do a lot of things, so definitely look up a few videos, or just experiment with things for a few hours in survival.

Another side of Minecraft is the creative mode, this is where you are given every single item, block, and mob in the game to do or build whatever you want. You won’t have to worry about any survival mechanics, you can just build to your hearts content.

And in each world you create you can also invite up to 8 friends to join you, no matter the game mode or world type, which is a very nice feature. And on top of that, there will also be servers to join in the future, which are basically online worlds that have several different mini-games to play with dozens of others players.

There is also a marketplace in Minecraft where you can spend money to buy skins, custom worlds, texture packs, and mini-games. The game never pushes you to spend any money, and there is already so much to do without buying anything, but if you’d like to support either Mojang or some Minecraft developers out there, check out the marketplace.

So now let’s get into the specifics of the VR mode itself. The VR mode allows you to switch between two perspectives in Minecraft, you can either play in a room with a flat screen in front of you, or be fully immersed in a first person perspective. There isn’t much to say about the first perspective, since it’s basically just like playing Minecraft on a normal screen. As for the first person perspective, this is where the update really shines. One of the best parts about this mode is just seeing the scale of everything, everything feels so different when you’re put into Minecraft, and it honestly makes the game feel new again. As for visuals, they were crystal clear when playing on a PS4 Pro, and I’ve heard from several of my viewers that it looks great on the original PS4 as well!

The VR mode also gives you plenty of options in the settings, you have both smooth and click turning, options for reticle movement, camera movement, and anything you might need to customize the experience to your liking.

Now one thing I do have to mention is that there is currently no move support in the game, which has stopped a few people from buying it. Personally for a game like Minecraft I think it works a lot better with a controller like the dualshock 4, especially if you’re playing for several hours at a time. And if the motion controls would be just like the Oculus version of Minecraft, then it would only allow you to move your hands, not manually mine or place blocks with them. But nonetheless, it would definitely be nice to have the option for move controllers in the future.

And finally I would like to bring up that there are several issues people are having with the game. There are tons of issues involving cross play, corrupted saves, VR mode not appearing, and various others. I personally didn’t encounter any of these issues, but I’ve seen a lot of people who have. So if you’re having any trouble definitely check out the PSVR reddit, YouTube, or various other forums for answers on how to solve these issues. I believe these will be solved in the future with patches, but for now there definitely are some annoying issues with it.

So overall Minecraft in VR is a must have! It’s I game I’ve spent thousands of hours on and is something I’ll only spend even more time on with this new VR update. It does have a few issues at the moment, but if you have a PSVR I still highly recommend giving Minecraft a shot, whether you think you’d like it or not!