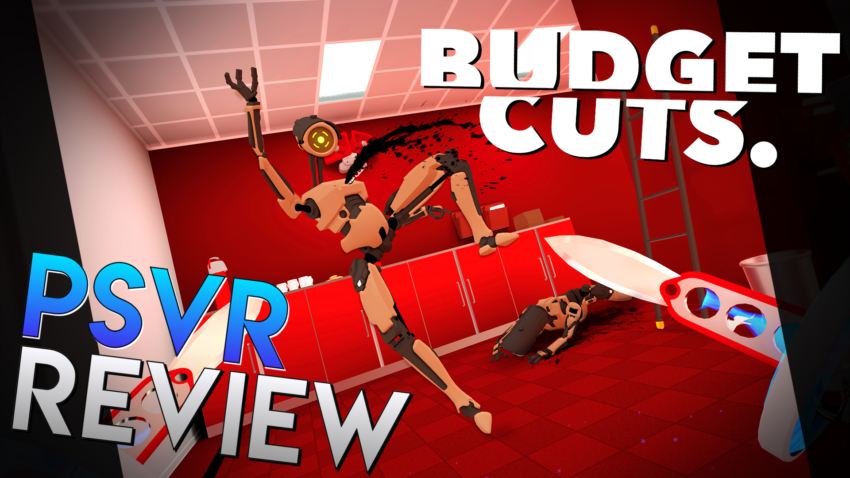 A VR game that’s been around for years on PCVR is Budget Cuts, it started out as a demo shortly after headsets launched on PC, then several years later got a full game. It’s commonly known to be one of the most innovative and best stealth games on PCVR headsets, so when I heard it was coming to PSVR I was very intrigued. But now that it’s out, is Budget Cuts any good?

Budget Cuts is a game that has you playing as a human trying to escape an office filled with robots, after you gain the help of a mysterious person over the phone. The story in the game isn’t anything crazy, but it’s enough to give you a reason to keep moving.

The gameplay of Budget Cuts mostly consists of stealth and puzzles. You’ll be going from floor to floor finding key cards, using elevators, crawling through vents, finding codes to unlock doors, and much more. Towards the start of the game you’re introduced to your best friends, knives and scissors. You can use the knives and scissors to throw at security robots to take them out, some robots take one hit, others take two. Once you throw a weapon at a robot you can then pull it out of the robot to reuse for later. As for the puzzles they mostly consist of finding key cards, finding access points to new areas, locating specific desks to find items, or just trying to figure out how to take down a room of robots. The puzzles are fairly simple, but they serve as a nice break-up from all of the action.

One of the most unique parts about budget cuts is how the game controls. You can use the move controllers that have several different tools built in, at the press of a button you’ll be able to open a set of tools and choose whatever you’d like to use. There’s a simple grab tool, where you can hold items and interact with objects, there’s a scope that shows hidden text, or makes things easier to read, and finally there’s the teleportation tool which has you shooting orbs towards where you want to teleport. Once the orb lands on the ground a bubble then appears on your controller, showing you the area around the orb. This allows you to scout out areas without actually teleporting to them, or just so that you can ensure it’s safe to move there before teleporting. That’s right, the game has teleportation only but hear me out. The game is completely designed around this mechanic, making it so that puzzles and navigation could only work with this mechanic. You’ll be shooting orbs through small vents, holes in the ceiling, arcing your shots to land in tricky areas, and much more. This might turn some of you off, but in my opinion this mechanic is very well done and honestly doesn’t feel like it’s holding you back as a player.

Going back to the mechanics of the game, you also have an inventory system where you can store several items at once, making it easy to carry weapons, keycards, and various other items. This can also be done with a press of a button on the move controller. And speaking of the move controllers, I would like to say that the move controller support is extremely well done in this game. The control layout is simple, the tracking is fantastic, and it plays to the games mechanics very well, this game wouldn’t work nearly as well with any other controller.

Budget Cuts is around 4-5 hours long in total, which can be even longer if you go for the hidden collectibles in the game, or even the platinum trophy. There are also 3 different difficulties which are equivalent to easy, medium, and hard, so time will differ depending on what mode you play. I played the game on medium, so you’ll definitely be spending more time with the game if you’re playing in hard mode.

And something that’s worth mentioning is that there is also an arcade mode to the game, which is a fun addition if you’re still looking for some fun after finishing the story mode.

Before we get to the verdict I would like to mention a few issues I had with the game. The first issue is that there is forced click turning, I couldn’t find smooth turning anywhere in the menu. It personally didn’t bother me, but I know many players can’t stand click turning, so I thought I’d bring it up. My next issue is that sometimes when I would hit a robot it would go flying, or even disappear completely, but this only happened twice in my play through so it didn’t really effect my experience. And my final and biggest issue is that the final level felt like a very sudden difficulty spike. I definitely expected a challenge from the final level, but the final level felt much more complicated than anything in the game, and in the end frustrated me more than anything else. But besides that it’s a very polished game, and was a blast to play!

So overall, Budget Cuts is a fantastic game! The game has several hours of great levels, tons of trophies to unlock, dozens of exciting and intense moments, three difficulties, hidden collectibles, an arcade mode, and is just an overall great game! Despite the few issues I have I would highly recommend Budget Cuts, and it is hands down the best stealth game I’ve played in VR so far! And now I just can’t wait to play Budget Cuts 2!