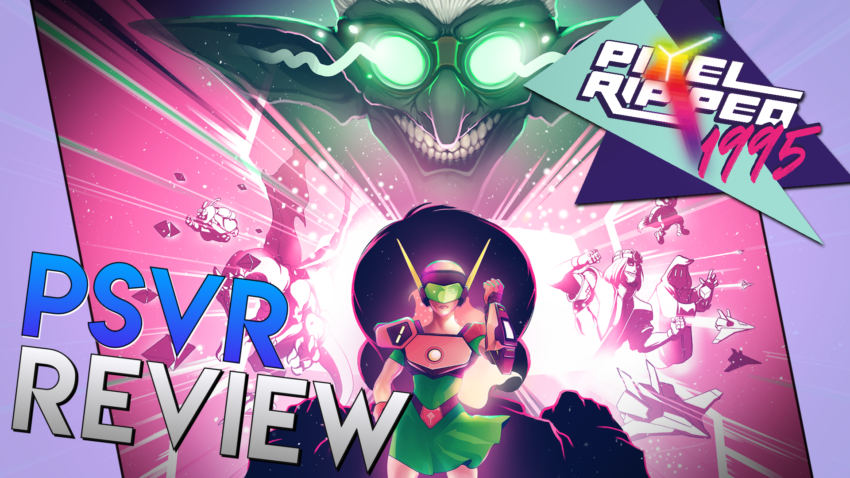 Pixel Ripped 1995 has you playing as a kid named David as he gets involved in the crazy adventures of the retro hero Dot! Since the game takes you back to 1995, you’ll be playing games that are 16-bit. The game has tons of references to the Super Nintendo, Sega Genesis, Sega 32x, and games from those systems. The story takes a lot of turns and plot points relating to pop culture in the 90s, and the writing takes full advantage of that. This game had me laughing several times throughout my play through, it was fantastic! There’s a ton of cliched characters and fitting locations as well.

As for the gameplay its pretty fun and chaotic. The goal of the game is to finish whatever game you’re playing while avoiding the distractions and obstacles in the real world, so you’ll have to multi-task at several points in the game. The game is constantly changing things up, and in each level you’ll be playing a different game. So in one level you’ll be playing a super metroid clone, and in another you’ll be playing streets of rage! There are also several points in the game where the game world will mesh with the real world, which is where things get really crazy. There’s so many crazy fun moments in Pixel Ripped 1995, but I’ll keep things spoiler free so I can keep the experience as fresh as possible. Each of the games plays well and brings the difficulty you would expect from the classic games it pulls from, I can guarantee you that you’ll die several times throughout your play through. But it was never too much for me to want to give up.

The controls in the game are precise and I had no issues with them. The game only supports the Dualshock 4 controller, but this felt perfect since for the majority of the game you’re holding a controller. Though every once in a while you will have to grab something with one of your hands, but this mechanic was done well with the DS4.

One thing I have to mention is the art style and music. The art style in the real world is a more cartoony style, like the previous game, which I think works well with what they’re going for. And the art style for the retro games is pixel art goodness, it perfectly captures the style of the games that inspired it, and at some points even looks better than some of those original games. And the music is fantastic, there’s great remixes of tracks we heard from the previous game, and tons of brand new tracks that are all great.

So overall, Pixel Ripped 1995 is amazing! It recaptures the magic of the first game in a whole new way and was a joy to play. The game took me around 3 hours to beat, but for other players that will depend on how many times you die in the game. The only issues I had with Pixel Ripped were a few small technical errors, but it was nothing game breaking or enough to ruin my enjoyment. If you’re a fan of video games, whether modern or retro, Pixel Ripped 1995 is worth your time. But I would highly recommend that you play the first game before this one, if you haven’t already!