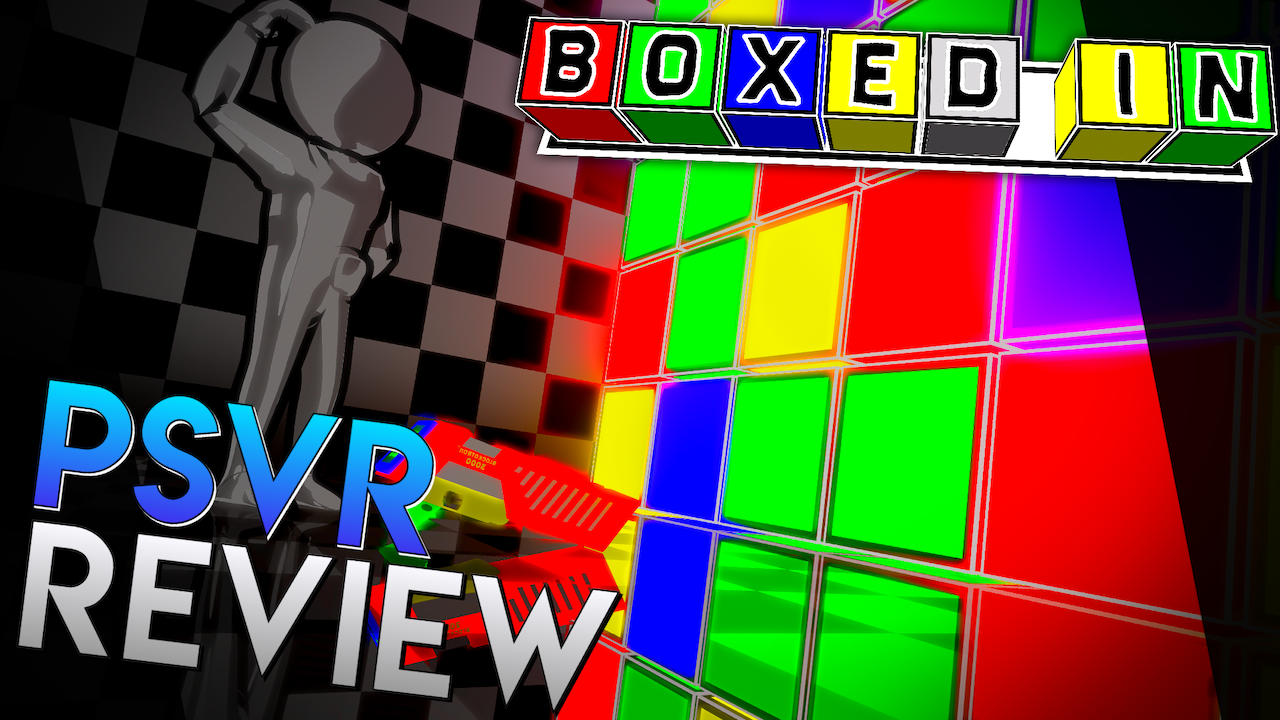 Something that always appeals to me is simpler puzzle games, whether it be Tetris, Peggle, Super Bust-A-Move, or whatever else, I’m always drawn to them. So when I saw Boxed In for the first time I was instantly excited to play it. And while I’m pretty late to the party, the question still stands: Is Boxed In any good?

Boxed In is a puzzle game revolving around matching colors and breaking blocks, which by itself isn’t anything we haven’t seen before, but when combined with a few other mechanics and Virtual Reality, really makes this game shine. But before getting deeper into the gameplay, let’s first discuss the various gamemodes, options, and features in the game.

Boxed In has all the settings you could want in a VR game, there’s both teleportation and full locomotion, snap and smooth turning, along with adjustable movement speeds and a few other options. The game supports the Dualshock 4, Move Controllers, and Aim Controller; each of the controllers work fine, but where the game really shines is when using the Aim Controller. The aim controller has a perfect button layout and feels the most natural when playing Boxed In. And on top of the various controllers and game settings, there are also global and friend leaderboards, which really enticed me to replay the game over and over.

As for the gamemodes, there is a survival mode and a solitaire mode. Survival mode puts you into a room as a wall of blocks slowly get pushed from one side to the other, and your goal is to prevent even a single block from touching the opposite end of the room; this is likely the mode you’ll play the most. As for the solitaire mode, this is more of a zen mode, as you’re put into a room already filled with blocks, and have to clear all of them out at your own pace. The solitaire mode makes for a nice break in between rounds of the more intense and fast-paced survival mode.

Now that I’ve discussed all the settings, gamemodes, and features, let’s talk about the gameplay of Boxed In. As I mentioned before, Boxed In is all about breaking blocks by matching colors, which you’ll perform through the use of a beam. The beam is a laser on your controller that will light up a random color each turn, and with that color, you can either change the color of a block or place a new block of that color next to an already existing block. On top of this, you can jump to get less visible spots, and also push blocks around, to get better combos or move a stranded block. I’d highly recommend doing the in-game tutorial, as at first I skipped it thinking you could only change the color of a block.

One of the great things about Boxed In is that it allows you to configure each gamemode, with each combination having its own leaderboards. You can change the number of colors on the blocks, where the blocks come from, and the matching patterns. For example, you could have anywhere from 3-5 colors on the screen, change the blocks to move from either in front, below, or above you, and change the matching patterns between a 3 block line or a 4 block square. Boxed In really excels in giving you the freedom to play however you want.

Before we get to the verdict, I also want to mention that this game has some really fitting music and visuals. The music for survival really gets you amped up, and the music for solitaire puts you into a relaxing mood. And while the visuals aren’t going to blow you away, they fit perfectly for a quick score-based puzzle game.

So overall, I was thoroughly impressed with Boxed In! I went into this game expecting to have a fun time but was shocked with how well all of the mechanics worked together. Moving around frantically in survival mode while matching colors, pushing blocks, and trying to avoid the inevitable end was a lot of fun, and is something I could see myself coming back to over and over again. And when combined with the good music, variety of options and leaderboards, and a low price tag of $6 in the U.S., I would highly recommend this game to anyone looking for a fun little puzzle game!