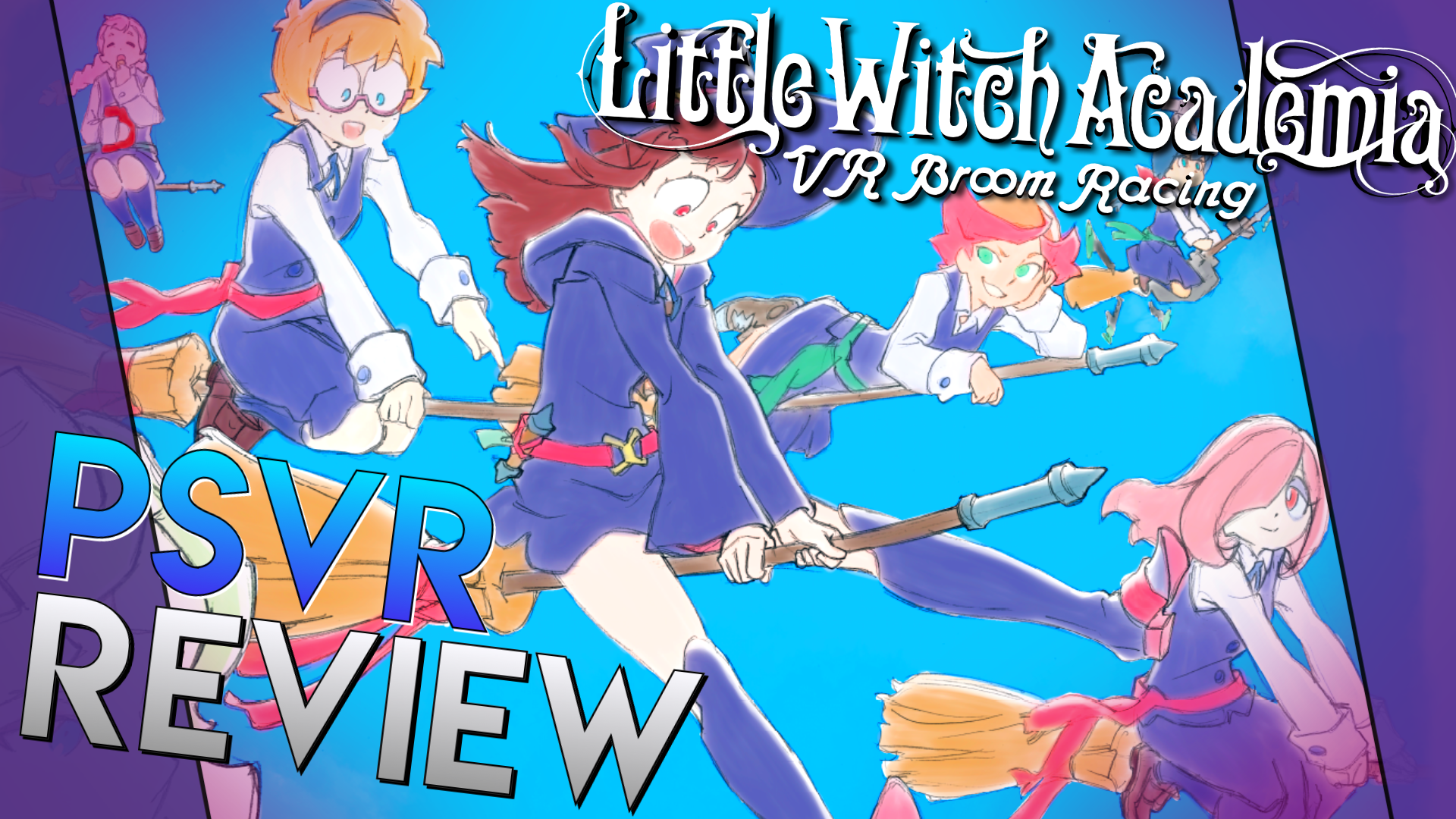 Every once in a while we’ll get a PSVR game or experience that ties itself to a franchise or property, whether it be the recent Spider-Man movies, the Doctor Who TV series, or an anime like One Piece or Spice & Wolf. I’ve always had a fascination with these games and experiences, as they can vary in quality drastically and the potential for them is high. Who wouldn’t want to take part in worlds they’ve only dreamt of being inside of, while also seeing or becoming your favorite characters. In the case of PSVR’s latest anime tie-in game, Little Witch Academia: VR Broom Racing, I’ve had no ties to the series previously, but yet I found myself intrigued to check it out just from the VR Broom Racing tagline alone. So now that Little Witch Academia, VR Broom Racing is out, is it any good?

Little Witch Academia: VR Broom Racing is a game all about, you guessed it, broom racing. There’s an ongoing storyline where you start out as a new student in the academy and have to train for a grand final race. Along the way, you’ll meet a cast of characters from the show and race with them. As an outsider, I found the dialogue pretty slow and basic, as well as the characters being one-note. The animation also leaves a bit to be desired. After seeing a few clips from the anime, it looks like this was a problem with the game’s writing and animation, rather than how the characters originally looked and were written; but then again, the story is never the focus of a racing game.

Upon starting the game you’ll be placed in a room in the academy that acts as a hub. From your room, you can access the shop to purchase new brooms and gems that increase your stats, all 13 stages in the game, an online mode, and customize your broom. There are three main game modes in the game, races, ghost hunts, and free flight. The races are what you’ll be playing the most, as they have you flying on your broom through rings as you race your opponents. You might be getting Superman 64 vibes when I mention flying through rings, but trust me, the rings are a helpful guide when you’re flying around. As a racer, you can tilt your head forward to start moving, tilt the Dualshock to aim your broom and hold L1 to brake. The controls are very simple and the DualShock tracking works great. The only problem I had relating to tracking and racing in general, is that you can’t turn so it makes playing seated a little annoying.

Each race consists of 2 laps, and they are filled with item boxes, obstacles, and portals leading to other parts of the race. There are three different items in the game, including acceleration, super acceleration, and web. The acceleration items are just boosts, and the web slows down other players. As for the obstacles, there are green and purple orbs on the map that upon hitting affect your movement. The purple orbs slow you down, and the green orbs boost you.

As for the Ghost Hunt game mode, this mode gives you a wand and lets you shoot at ghosts flying towards you. Instead of having to complete 2 laps, the Ghost Hunt has a start and endpoint. This mode isn’t as enjoyable as the race mode, the ghosts are just flat images that fly forward out of a portal in front of you, then fall into place, and it’s hard to hit any ghosts that aren’t directly in front of you.

And finally, there is the free flight mode, which you can access through the online menu. This is a mode you don’t unlock until later in the game, but sadly there wasn’t anyone online for me to play with. You can still fly around freely though, but it’s not something that will keep you busy for long. And once again, I couldn’t find a turn button in the control menu or options, so free flight mode is more annoying to play when compared to the races and ghost hunts, where they mostly keep you facing forward.

There’s definitely some potential with broom racing, but I don’t think the developers reached it. Before I can explain why I think that, we need to get into some of the issues I had. First of all, the bot opponents are way too easy up until the last race or two; it’s a case of once you get past your opponents, you’ll never see them again. There is a hard mode in the game, but after trying a race with it, there didn’t appear to be much of a difference. Another issue is that most of the courses just aren’t very interesting. The change in courses mostly feels like a change in backgrounds, as you’re flying in wide-open areas, with obstacles in the form of orbs; I would have liked to see the areas being used more creatively; such as having to fly through a small cave, dodging a forest of mushrooms, and so on. There’s also a lot of moments where it’s easy to lose track of where you’re going, despite the rings, and a slightly visible road, I found myself going completely off track without knowing it often in the later tracks. But I guess my main issue comes from the lack of challenge, I think the freedom of movement with the brooms, combined with the mostly open areas you fly in, and the easy opponents, makes for an unexciting experience. I got a sense of the game’s potential on the final stage, where I had to replay it twice to win, while I made sure I was getting all the boosts, item boxes, and using the shortcuts to win. Before that course, I was just staying in 1st without trying, while waving around the Dualshock mindlessly.

So overall, Little Witch Academia: VR Broom Racing isn’t very good. You might get some more enjoyment out of seeing the world and characters if you’re a fan of the show, but I still don’t think you’ll find any more value than I did when it comes to the gameplay, especially with how high the price tag is right now, I just can’t justify recommending this game for either fans of the anime or people like me. This game could definitely benefit from some more items, harder opponents, maybe something similar to drifting, and better maps that make use of their environment. But as it stands, I would save your money for something else.