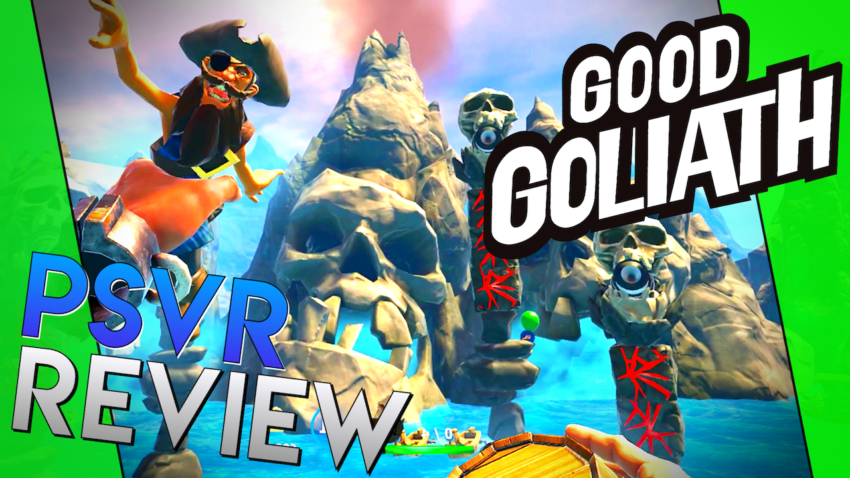 Announced back in February was a game called Good Goliath for the Playstation VR, made by Knock Twice Games. We weren’t given many details, but of course I’m interested in every single PSVR game. So now that the game is out, is Good Goliath any good?

Good Goliath is a PSVR game that has you playing as a Goliath that just woke up from a deep slumber, and can’t remember anything. You soon run into trouble and have to survive waves of angry villagers. The game has an ongoing story, but it’s just a simple tale, and won’t really impress anybody.

The gameplay of Good Goliath consists of dodging attacks, and picking up items thrown at you. As a Goliath you can punch, grab, and throw items or enemies. The throwing mechanics worked pretty well for me, but on occasion I would have a lot of trouble trying to hit targets, it can be a little inconsistent at times. Your goal is to survive several waves of enemies by throwing items back at them. The game takes a simple concept and continues to add to it with each level you play. On the first level you’ll just be throwing pitchforks back at enemies, but before you know it you’ll be dodging explosives, fighting boss battles, avoiding cannons, and much more. The developers did a great job at keeping the game fresh, as they’re constantly introducing new environments, enemies, weapons, and items. It can also get pretty challenging at times, which is why they added a checkpoint system. Which sets a checkpoint every few waves, it’s really helpful, because you will die a few times.

There are a total of 3 worlds in the game, with each world having three levels within it. A world has 2 wave survival levels, and 1 boss level at the end. The game took me a little over 2 hours to finish, with no real reason to replay the levels unless you want to get a higher score. The only point to getting a higher score is to unlock medals, which doesn’t really do anything. But you can break chests within the game to unlock cosmetic hands, which are cool. There is no online leaderboard to compete with friends. If they added that it might make me want to replay the stages, because the scoring system is actually pretty good. It involves combos, multipliers, hitting special targets, and more.

So overall, Good Goliath is good! Good Goliath is at it’s best when it’s chaotic. Sometimes they’ll just throw everything they have at you, and it can make for a really fun and intense gameplay experience. The throwing can be a little inconsistent at times, but otherwise everything worked really well for me. If you’re desperate for a fun game to play for a few hours, or have family you could play this with, definitely consider checking Good Goliath out.