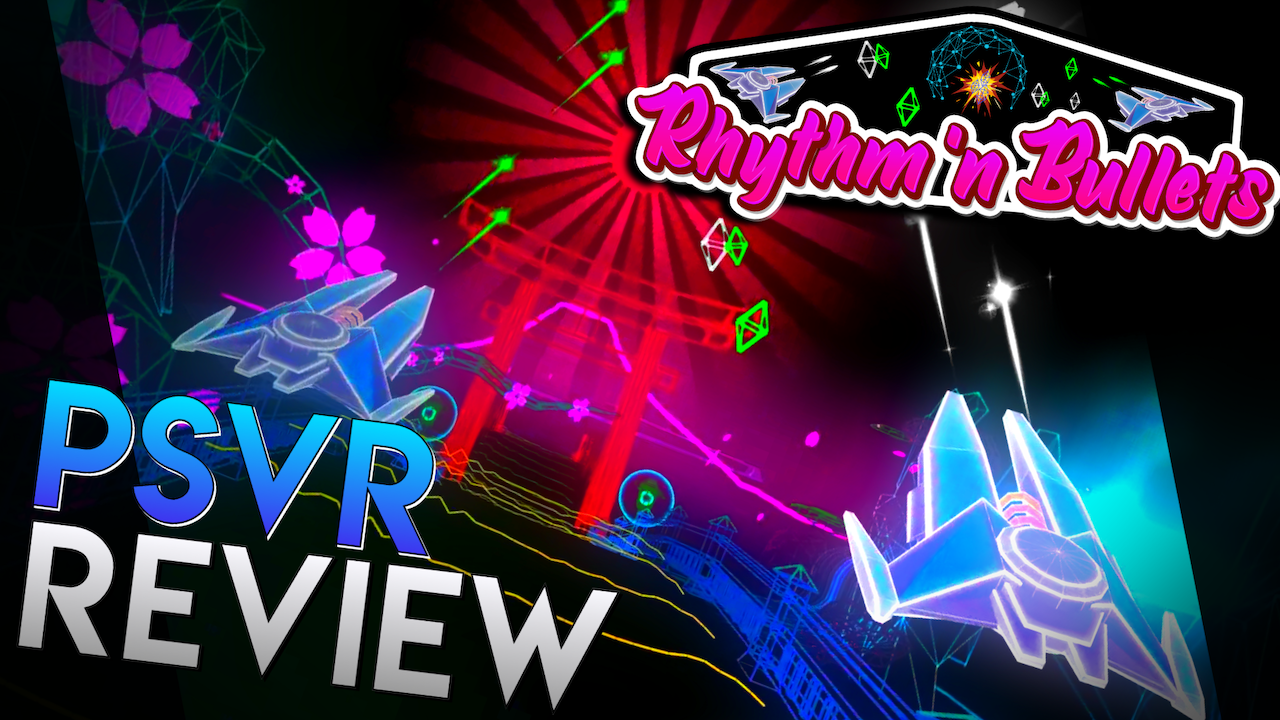 A recent PSVR game that wasn’t on my radar was Rhythm ’N Bullets. Out of the blue, I got an email from the developer DB Creations about their new game, and without really looking into what it was about I installed the game on my PlayStation and tried it out. I always enjoy it when a PSVR game comes out of nowhere, so I can try out a new game without any previous hype or expectations. But now the question remains, is Rhythm ’N Bullets any good?

Rhythm ’N Bullets is a retro-styled shoot-em-up that’s all about defending your core and ships from enemies. This was a pleasant surprise for me, as based on the title I went into the game expecting more of a traditional rhythm game like others on the headset. The gameplay of Rhythm N’ Bullets consists of firing from two ships controlled by the move controllers. I’ve seen this mechanic done a few times, and it’s always something I enjoy; it kind of gives you the sense of playing with toys, but instead, they can actually shoot and take damage. With these ships, you’ll have to alternate between three different bullet colors so that you can destroy the corresponding color of enemies. This makes for some hectic moments, as you’ll have to not only try and hit the enemies but also worry about matching the correct colors. You can also put a shield around your ship to push enemy ships back for a moment, this is especially helpful when you need more time to shoot enemies getting close to your core. There’s also a mechanic for breaking enemy shields whenever you press both the shield button and fire button.

Another main mechanic is the multiplier. The more you shoot enemies, the more your multiplier will build; and from increasing your multiplier you’ll also be increasing your health, the number of bullets you can shoot, as well as your overall score. You can increase this multiplier faster by shooting bullets on time with the beat, which will also make your bullets home to enemies, this is where the rhythm comes into play. There are also power-ups that’ll appear every once in a while, such as rapid-fire, or missiles.

You’ll need to learn these mechanics well because, in addition to standard enemies, there are also boss battles in the game. These bosses shoot both yellow and purple orbs towards the player. Yellow orbs damage you, but purple orbs can be reflected back at the boss to destroy their shield. And upon destroying the boss shield, you can then match the boss’s color with your bullets and damage its core.

Rhythm ’N Bullets has a total of 3 game modes: Campaign, Relax, and Endless. Campaign takes you through three different levels, each with its own unique waves, bosses, and themes. You can get through this campaign in only 15 to 20 minutes, but it’s fun while it lasts. As for the relax game mode, this is basically a sandbox where you can place any enemy you want and shoot at them. It’s just a game mode for goofing off and shooting for the sake of shooting, the enemies don’t attack you in this game mode. Finally, there is the main attraction of Rhythm ’N Bullets, the Endless game mode. This mode endlessly sends waves of enemies and bosses at you until you or your core gets destroyed, and unlike the campaign, this mode actually features all 5 different themes. This mode will really test your skills, as every few minutes both the enemy spawn speed and general difficulty will increase, challenging your reflexes and ability to multi-task. This mode also includes an online leaderboard to see where you rank amongst the world and your friends.

Before we get to the verdict, I’d like to say that the retro theme and music works really well with the game. The graphical style is really neat to look at, and the game is crystal clear inside of the headset. The only problem I had with the visuals, was that sometimes the enemies blend in with the background. But luckily the core tells you where enemies are coming from, so it wasn’t too bad. As for the music it goes along really well with the visuals and gameplay. I often found myself dancing to the beat while shooting down enemies, at least until things got too hectic.

Overall, I had a fun time with Rhythm ’N Bullets! It’s obviously not the next big thing, or a must-have for the headset, but if you want a smaller game to try out in-between some of PSVR’s bigger releases, I think you might have a fun time with this game. I’d mainly recommend it for those who enjoy shoot-em-ups, or for fans of endless modes in games where the main hook is to get high scores. Otherwise, you might want to hold off, as most of the replayability comes from the endless mode.