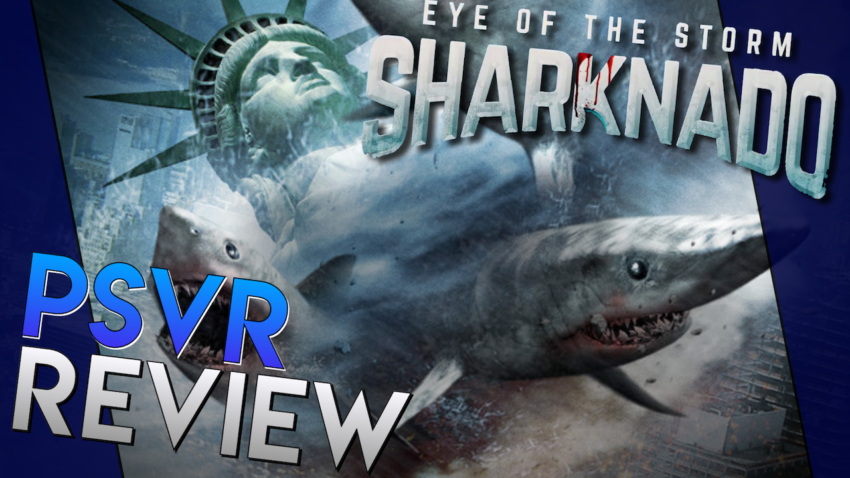 There are 6 Sharknado films filled with action, comedy, mediocre CGI, and over dramatic moments. But I never expected a VR game to come out of it, so when I heard about Sharknado VR: Eye Of The Storm, I was intrigued but had very low expectations. So now that it’s out, is Sharknado VR any good?

Sharknado VR: Eye Of The Storm is a game that has you fighting against a ton of Sharks in the middle of a tornado, hence the name Sharknado. The story consists of one cutscene that has you inside of a bar, when all of the sudden a weather warning comes on, and soon after sharks come flying into the bar. It’s more of just a quick setup to the game rather than a story.

The gameplay consists of shooting wave after wave of sharks. The sharks will come flying from one direction toward you and you have to do your best to survive. You start out with a pistol and later get other weapons such as a shotgun, machine gun, and an abnormally large chainsaw. Each of the weapons have limited amount of ammo, but it spawns around the level randomly while you play. You can access your weapons through a weapon wheel, or by pressing a button on the right move controller to instantly switch weapons. The weapons work fine, but I often found myself just using the chainsaw all of the time, as it almost instantly killed each shark. Some of the supposedly stronger weapons I got actually felt weaker than the previous weapons. Another issue I found was that with some of the weapons bullets didn’t seem to hit the sharks unless they were really close to me. Your other abilities allow you to jump really high and slow down time, which worked fine, but I didn’t ever find them useful.

Surprisingly the game has full locomotion and smooth turning, with the options for teleportation and click turning. The smooth turning works good, but the locomotion system is very awkward and bad. To move forward you have to lean your move controller really far forward, and it didn’t seem to work most of the time for me. So I ended up using teleportation instead of locomotion. The game also doesn’t have support for the daulshock 4 or any other peripheral, so the move controllers are your only option.

The game just has a lot of random issues, like being able to teleport into objects like cars. It’s just not a very polished experience and feels rushed. And the gameplay here is just too simple, after a few minutes of experimenting I learned that the best thing to do is just stand still, look in the direction of the sharks, and endlessly kill them until the wave is over. They occasionally introduce citizens to protect, but it doesn’t really change how you play it.

So overall, Sharknado VR isn’t good. It’s definitely not the worst game on the headset, but it’s just not very fun to play past the first few minutes. It’s just a cycle of standing in a small arena and shooting in one direction towards the sharks. So at it’s current state, I just can’t recommend Sharknado VR.